New digital visualisation techniques came into their own on a complex water main replacement in Scotland during Covid-19 restrictions.

It was no easy task as the technical challenges on the Scottish Water project were further complicated by the need to plan and deliver the work during the pandemic while social distancing was in place.

Restricted workspace close to protected trees, taking the new pipes under a dual carriageway and working close to high voltage buried cables were part of the known challenges on the project.

Planning, designing and delivering the work under Covid-19 restrictions was an added and unexpected challenge along with the discovery of some unforeseen obstructions during excavation.

Despite the impact of the pandemic on the work, there was no option to delay it as the poor condition of the cast iron pipework had already resulted in pipe bursts which disrupted water supplies. Testing showed that more sections of pipe needed to be replaced than originally anticipated. During the planning stages, the length of 700mm diameter water main to be replaced grew from 300m to 680m.

“We looked at lots of options, including relining the existing pipes and trenchless methods, but open cut replacement was the only option,” explains George Leslie site manager Scott Munro.

The open cut approach meant that a cofferdam structure was needed to construct a 90° bend in the pipes – with thrust blocks to counteract the 14 bar internal pressure – and connect them to the existing pipes within the dual carriageway.

George Leslie’s team knew that, even with just the technical challenges to contend with, careful planning was going to be needed to deliver the project successfully. The trial of a new digital temporary works solution proved to be the key.

At the same time as the contractor was planning the project, temporary works firm Mabey Hire was developing its Engineer Visualise Explore (Eve) software and the work at Douglas became the first live scheme to put it to the test. 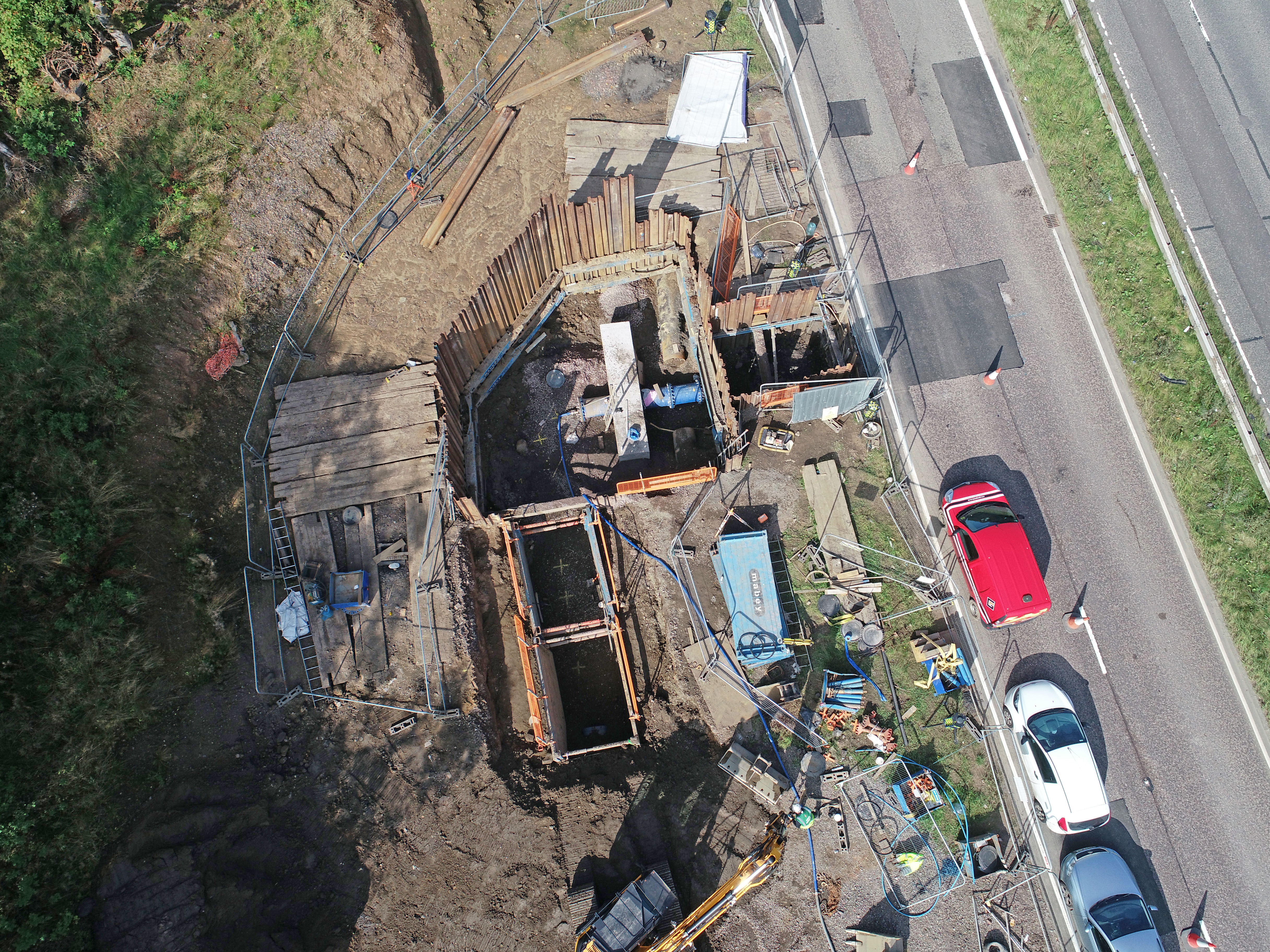 Eve uses the latest in immersive technology and is designed to integrate with building information modelling workflows – including Autodesk Revit, Civils3D and Navisworks. This allows users to “walk through” their projects wearing virtual reality headsets or examine them on computer screens and virtually rehearse the construction process before moving onto site.

Covid restrictions meant that Munro’s team was unable to take the virtual reality option but team members were able to work remotely, examine the construction challenges on their computer screens and talk through the design issues.

George Leslie civil engineer Scott McCaw says: “Eve allowed us to bring information about the services surrounding the excavation into the model and plan the temporary and permanent works.”

Using Eve showed the team that a five sided cofferdam was needed to create enough space for construction while working around the limitations placed on the work by the environmental issues, topography and other services surrounding the site.

“A square cofferdam would have been simpler, but there wasn’t space on the site,” says Munro. “Eve allowed us to communicate with each other more effectively and drive the change in temporary works design.”

He adds that the digital tool also helped the team to plan temporary works installation and the construction programme to allow for social distancing.

With the work encroaching on the dual carriageway, which is also a diversion route for the M74 motorway, traffic controls were needed for some of the work.

This, along with the site being close to environmentally sensitive woodland, meant there was some concern within the local community about the project’s impact despite the urgent need to replace the pipes.

According to Munro, the Eve tool could have been very useful in explaining the construction process to the community if Covid-19 restrictions had not prevented planned public meetings from going ahead.

During the temporary works installation, Eve also proved its worth when the team discovered some unexpected buried obstructions including old walls and a disused thrust block from previous water mains. Munro says: “Eve allowed us to review the construction sequence and check the design still worked.”

With the temporary works in place, construction of the new water mains went smoothly and was completed on time last autumn. McCaw and Munro credit this to the use of Eve.

“Eve definitely did assist with the planning and it would have been harder to deal with the discoveries on site without it too,” says Munro. “The improved planning also allowed us to cut the time we needed on site from an expected six weeks to four.”

McCaw adds: “Eve also improved communication once we were on site. It gave clarity about the aim of the work, and having the live services we were working next to marked within the model, heightened the awareness of the site team to the care needed during the work.”

According to Mabey Hire digital engineer Andrew Gascoine, the George Leslie team’s experience of using Eve was also invaluable in developing the solution which has just been made commercially available to all of the firm’s customers.

“The project was the first to use Eve and it has helped shape the solution,” says Gascoine.

“The experience of the George Leslie team helped us to understand the functionality needs, the dialogue it created and how it could highlight issues at the planning stage.”

As a result of the experience, new features have been added to Eve and Gascoine believes that these will further benefit users.

Munro and McCaw clearly also see further benefits of using Eve as they are both working on the early stages of other projects that will use it.